ISFED held meetings in Municipalities of Khoni and Samtredia 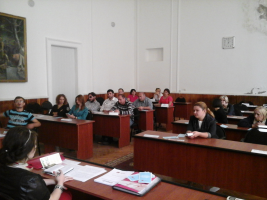 On October 6-7, International Society for Fair Elections and Democracy held meetings in municipalities of Khoni and Samtredia for the discussion of rights of civil servants and respective legal guarantees. The meetings were attended by municipal public servants and other stakeholders.

Participants showed great interest and welcomed steps for the protection of rights of civil servants. They also highlighted the importance of holding fair competitions and protecting rights of candidates.

The meeting also featured discussion of the ongoing electoral system reform and its importance. Participants received information about drawbacks of the existing electoral system and heard views of NGOs, experts and political parties about changes in the system. Majority of the participants agreed that the existing electoral system is problematic. In addition, it was stated that because of wrong perceptions about functions of legislative and local self-government authorities, majoritarian MPs are often perceived as officials who should take care of local problems.

The meetings are held within the project Protecting Rights of Civil Servants for Politically Neutral and Discrimination-Free Public Service in Georgia, implemented by ISFED with financial support from the Embassy of Netherlands in Georgia, with the aim of promoting protection of rights of civil servants and establishing politically neutral public service and professional civil servants