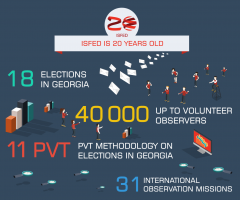 In September 2015, the International Society for Fair Elections and Democracy, also
known as ISFED, turned 20. In 1995, as the Parliament of Georgia adopted a new Constitution, the country was preparing for the parliamentary and the presidential elections; however, an organization that would carry out citizen observation of the elections still did not exist, which is why four NGOs founded ISFED.