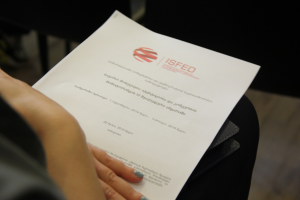 On May 22nd, 2015 International Society for Fair Elections and Democracy (ISFED) presented its third interim report on monitoring the process of Certification and Competition in Public Service.
Since October 2014, ISFED 73 observers have been monitoring the process of Competitions and Certification throughout Georgia. In total, organization conducted the monitoring of interviews in 112 local self-governing agencies.
Challenges to Accessing Public Information
Throughout Georgia, total of 61 self-governing agencies and 52 Commissions for Certification and Competition provided ISFED with the information in response to its over 300 requests out of 850 marked by errors and violations. Specifically, 43% of local self-governing agencies and 68% of Commissions for Certification and Competition issued the information with significant errors and violations prescribed by the law. Challenges to accessing the public information revealed in 37 Gamgeobas, 17  Sakrebulos and 7 City Halls.
Notably, 26 commissions refused to provide access to final results of competitions and certifications, while 19 commissions classified these results as personal information, remaining commissions did not respond to ISFED’s request at all or declined to elaborate on their refusal.
ISFED believes that the refusal of commissions and self-governing agencies to provide access to the results was illegal. Because the process of certification and competition in public service is an issue of public concern, any pertinent document must be publicly accessible. This will allow determining whether a particular commission made fair and legitimate decisions in the process of evaluation and recruitment of candidates. In this respect, cooperation with organizations monitoring and evaluation the process, and keeping the public informed is of particular importance.
Process of  Interviews
From Ocober 2014 to April 2015 ISFED monitored interviews during the process of competition and certification in 52 municipalities and 6 self-governing cities.  According to ISFED’s observer reports, on the most part interviews monitored by ISFED (In 14 local self-governing agencies ISFED had restrictions with observation) ran smoothly, equal time was allocated to all candidates and questions were similar in terms of their content and difficulty. Commission members were mostly positive towards the candidates. However, in 12 self-governing territories (Kareli, Batumi, Zestaponi, Terjola, Khulo, Tsageri, Gardabani, Kaspi, Keda, Gori Akhmeta, Tbilisi) commission members asked irrelevant questions, pressured and discriminated against some candidates based on their political affiliation and gender.
ISFED’s Assessment of the Process of Selection of Winning Candidates
ISFED was unable to evaluate the process of selection of public service employees in 40 self-government agencies due to restrictions of monitoring and challenges to accessing information.
In 56 self-governing agencies where ISFED analyzed the process of election, commissions were fair and objective in evaluating interviews and determining winners. However, ISFED believes that the commission could have made a better choice for 100 positions.
In 100 cases where organization disagrees with the decisions made by commissions or local self-governing agencies, ISFED found several important trends:
• Commissions and self-governing agencies intentionally left some of the positions vacant, to keep temporary appointees and other acting employees in place. Competitions were announced to be ruined even when commissions had an opportunity to choose qualified candidates; new competitions were scheduled in hopes of letting temporary appointees and other acting employees re-take tests that they had failed during the first stage of selection process (Gamgeobas of Adigeni and Khobi);
• Commission remained some positions vacant even they had the  alternative of choosing the candidates (Gamgeobas of Ambrolauri, Tkibuli, Chiatura, Khobi, Chkhorotsku, Kobuleti, Khulo, City Halls of Batumi and Ambrolauri);
• Commissions had an opportunity to select highly-qualified candidates as winners but they chose not to and made decisions in favor of poorly qualified candidates ( Gamgeobas of Ambrolauri, Baghdati, Tskaltubo, Khobi, Zugdidi, Chkhorotsku, Kobuleti, Dusheti, Khulo, Keda, Chokhatauri, Sakrebulo of Batumi, City Hall of Batumi).
• Commissions selected unqualified candidates as winners when they had no other choice, instead of announcing competition as ruined and rescheduling a new one for the purpose of selecting qualified candidates (Gamgeobas of Baghdati, Zugdidi, Kobuleti, Khulo, Kaspi and City Hall of Batumi).
Results of ISFED’s monitoring suggest that problems related to the lack of criteria for selection of candidates; varying approach to providing access to public information, and broad guidelines for conducting certification and competition processes, which do not include important details, had a negative impact on the course of the process and created obstacles for ISFED both for monitoring and for accessing public information. ISFED believes that these problems raised questions about validity of evaluation of candidates and credibility of final decisions, and also led to candidates’ complaints and discontent. Therefore, thorough evaluation of transparency and fairness of the process of certification and competition, and determination of whether final decisions made by the commission are objective is impossible.
ISFED continues to monitor the process of certification and competition in public services, and will periodically update public about the course of the process, trends identified and violations detected. ISFED is ready to provide legal consultation to all individuals who believe that their rights were violated in the process of competitions and certification.
This report is made possible by the generous support of the American people through the United States Agency for International Development (USAID). The contents are the responsibility of ISFED and do not necessarily reflect the views of USAID, Amereican people or the United States Government.