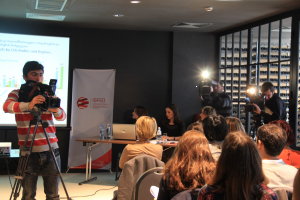 The International Society for Fair Elections and Democracy (ISFED) is implementing monitoring of bodies of local self-government in all self-governing communities and cities of Georgia by means of 73 observers.
ISFED requested access to public information regarding staff changes in self-government agencies throughout Georgia for the period from July 1 through October 1, 2014. The information received from self-government authorities suggest that total of 884 public servants were dismissed during the noted period of time.  Most of the dismissals occurred in Tbilisi (226), followed by Imereti (173), Kvemo Kartli (144), Adjara (90) and Kakheti (63) regions. In the regions of Samegrelo Zemo Svaneti, Samtskhe Javakheti, Guria and Mtskheta, number of dismissed employees ranged from 30 to 50. Fewer public service employees were dimsissed in Shida Kartli region, while the lowest number of dismissed employees (7) was found in Racha Lechkhumi and Kvemo Svaneti regions.