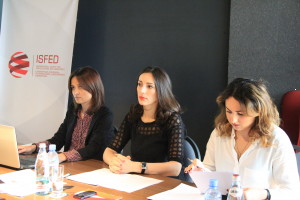 Today, on December 4th, The International Society for Fair Elections and Democracy (ISFED) presented the interim report of monitoring of Local Self-Government bodies. ISFED is implementing the monitoring in all self-governing communities and cities of Georgia by means of 73 observers.
The organization requested public information regarding staff changes in self-government agencies throughout Georgia for the period from July 1st through October 1st, 2014. The information received from self-government authorities suggest that total of 884 public servants were dismissed during the reporting period of time. Notably, majority of the public service employees were dismissed based on their own letters of resignation for personal reasons (434). 118 employees were dismissed after expiration of their term of office, while in 311 cases the reason of dismissal was staff reorganization, job cuts and liquidations.
In addition to the dismissals, 88 public servants were demoted and their salaries were reduced accordingly during the reporting period.  Reasons cited as grounds for demotions include reorganization or new appointments to managing positions.
Further, majority of dismissed or demoted public service employees are independent individuals without a party affiliation or represent/are affiliated with the United National Movement (UNM).
During the reporting period, total of 177 public servants were promoted throughout Georgia at the local level and total of 3019 new hired in public service agencies, appointed mostly on temporary and interim positions. Majority of promoted or hired employees represent/are affiliated with the coalition Georgian Dream or independent individuals without party affiliation.
ISFED’s observers attended total of 110 meetings held by Sakrebulos of self-governing units in August-September 2014. Information about meetings scheduled to be held in 6 municipalities had not been publicly announced and in 10 cases the process was administered more or less properly but certain flaws were found.
In order to obtain public information, ISFED presented 381 requests to different local bodies. In majority of the cases (280), public information requested by ISFED’s coordinators was provided by relevant agencies within less than 10 days, while in 46  cases public information was provided in violation of law, i.e. after expiration of the ten-day deadline. In 307 cases the information was provided in full, while in 74 cases it was incomplete.
Since 2014 ISFED has been monitoring the process of attestation and competition of public servants in local self-government agencies throughout Georgia. ISFED monitored total of 81 testings performed at 61 places. Monitors interviewed 922 candidates out of 1800, some of which stated that tests were more or less difficult or difficult. However, observers found certain technical deficiencies that hindered timely launch of the process in Kutaisi, Gori, Adigeni and Akhaltsikhe, as in other cases process was well organized. Based on information provided by the participants in Tbilisi due to the high threshold (75%) majority could not pass the test. However, it should be noted that despite of low threshold (50%) in Adigeni Municipality over 60% of participants could not succeed.
Interview is a stage of the process of ccompetition of public officers. Some of the local self-government agencies allowed NGOs to monitor the process; however, we were subjected to certain restrictions in Tbilisi, Kutaisi and Gori City Halls and Gamgeoba of Gori.  Certification committees of Akhaltsikhe, Lanchkhuti, Sighnaghi, Aspindza municipalities refused to NGO representatives to attend the process of interviewing that raised a reasonable doubt that the committees may be biased in their decisions.
ISFED continues the monitoring of local self-government bodies’ activities. Next report will provide information about staff changes, attestation of public servants and competitions during the reporting period of October-December.
<< Back