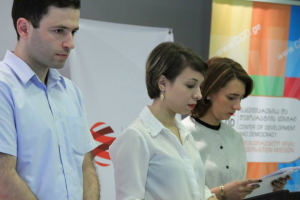 The monitoring conducted by three nongovernmental organizations showed that, compared with the 2012 parliamentary elections, during the 2014 pre-election period, there was a smaller number of different types of violations of electoral law, including the cases of the use of administrative resources for campaign purposes and the instances of voter bribing and intimidation and detention of political activists. However, the number of problems during the pre-election period of the 2014 local government elections was much higher compared with the 2013 presidential election.
There was an expectation of fundamental legislative changes in the process of the drafting of the Local Government Code and reform of the Electoral Code in 2013-2014. However, the ultimate results of the reform fell short of the ambitious plans that the authorities had initially announced. Regrettably, the electoral system has not changed, which should have been the main priority of the reform.
Like the electoral system, we believe that the rules for the appointment of electoral administration need to be revised in the shortest possible period of time since they cannot ensure multiparty composition of commissions.
The question of voter list remains a problem too since the current voter list cannot ensure a high level of credibility and does not reflect the real situation.
The electoral administration was duly prepared for the start of the pre-election period. It is noteworthy that the Central Electoral Commission (CEC) did not simply consider the appeal that it had received but also showed interest in the media reports concerning possible violations and examined alleged irregularities proactively, which is a welcome attitude. The CEC's inconsistent approach to the registration of candidates raised questions.
We believe that the work of the Inter-Agency Task Force for Free and Fair Elections should have been more effective in terms of the prevention of violations and timely reaction to them. During the period of its work, the commission did not present a report on how it had reacted to reported violations.
During the pre-election period, multiple cases where candidates withdrew from the elections as a result of likely pressure on them were reported. The law enforcement agencies need to examine these in deatail.
Multiple cases of obstruction of election campaign, physical confrontation, and damage to campaign materials were recorded, which indicates that violent nature of political culture remains a problem.
There have been effectively no instances of formal use of administrative resources, although several projects financed from the state budget had a similar impact.
The work of the State Audit Office before the 2014 local elections should be assessed positively as it did not show any signs of different treatment of different parties.
The media outlets provided quite a balanced coverage of pre-election developments before the 2014 local elections, although there was a lack of in-depth coverage of the election campaign.
The gender imbalance among the nominated candidates was problematic, which is further proof of the need for a change in the electoral system and revision of the norms concerning gender quotas.
The key findings of the nongovernmental organizations are presented below