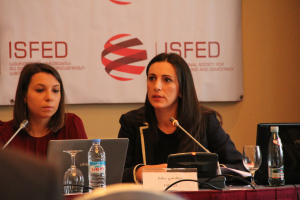 During the reporting period ISFED was actively monitoring the course of pre-election campaigning in all election precincts.
ISFED has found particular growth of the pre-election campaign in intensity during the period from September 8, 2013, through October 6, 2013. Varioius political parties and candidates held 253 public meetings, which is approximately three times more than the number of public meetings held over the last month.
During the reporting period ISFED identified five acts of pressure, including four by members of the coalition Georgian Dream against members of the administration and one by supporter of the candidate of the Democratic Movement – United Georgia against socially vulnerable population in villages of Pankisi Gorge, who were forced to attend pre-election meeting.
We also found one case that involved physical assault on political grounds against a member of the Democratic Movement – United Georgia, as well as one alleged pressure against a supporter of the United National Movement.
During the reporting period we found thre cases of obstruction of pre-election campaigning. In Zugdidi, Tbilisi and the village of Asureti, Tetritskaro Municipality, pre-election campaigning by Davit Bakradze, UNM’s presidential candidate was obstructed.
We also found one cases that involved pre-election campaigning at an improper venue – in the building of a public school in the village of Zani Community, Senaki District.