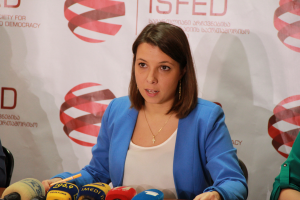 The International Society for Fair Elections and Democracy presents fourth interim report of pre-election monitoring for October 27, 2013 presidential elections. The reporting period reflects violations identified during the period from August 20 through September 8, 2013.
“We have found two cases that involved physical assault and one case that involved pressure on political grounds. We identified three facts that involved use of state resources. ISFED considers transferring of the agency and its material base owned by the Prime Minister’s family to the management of Info 9 free of charge as possible vote buying,”- says Nino Lomjaria, Executive Director of ISFED.
The report also covers the developments in local self-government agencies. Total of 10 Gamgebelis have been replaced, including 7 who resigned for personal reasons, one arrested and two dismissed by Sakrebulo. Notably, majority of changes occurred amid pressure and confrontation.
ISFED believes that during the reporting period the CEC refused to register Ms. Salome Zourabishvili as a presidential candidate based on wrongful interpretation of Constitutional norms.
ISFED welcomes that the Inter Agency Task Force for Free and Fair Elections took into account our recommendations; however, it did not react to some of the recommendations presented by us.
“ISFED urges public servants once more to refrain from agitation during working hours, and state officials not to allow forcing employees of state agencies to participate in pre-election campaigns. We urge the Prime Minister to refrain from any activities that may be perceived as vote buying. We would like to address the public broadcaster’s management and the board of trustees [with a recommendation] to ensure political pluralism during airtime and objective coverage of developments,” – says Nino Lomjaria.
In the process of monitoring ISFED is guided by international standards for monitoring organizations, including the Declaration of Global Principles of Non-Partisan Election Observation and Monitoring by Citizens.