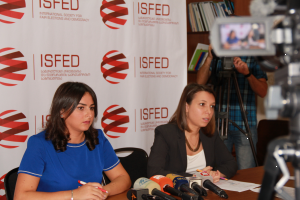 The International Society for Fair Elections and Democracy (ISFED) presents fourth and final report of monitoring developments in municipalities following the 2012 parliamentary elections. The report entails information about political processes in self-governments, staff changes, protest rallies and legal persecution of self-government officials.
Starting from October 1, 2012 to August 3, 2013, Gamgebelis were replaced in total of 55 municipalities throughout Georgia, including several times in certain municipalities. Competitions for selection of Gamgebelis were announced only in 19 municipalities, while in remaining cases Sakrebulo appointed interim Gamgebelis. “Notably, the fourth wave of replacement of Gamgebelis started recently, meaning that a number of municipalities have resorted to procedures for impeachment of new Gamgebelis appointed following the elections. There were cases involving coercion as well. After August 3, before publishing of the report, Gamgebelis were replaced in 13 more municipalities, Sakrebulo chairpersons were replaced in three municipalities and Mayors in two cities,” – Nino Lomjaria, ISFED’s Executive Director has noted.
Starting from October 1, 2012 to August 3, 2013, Sakrebulo Chairpersons were replaced in 31 municipalities. 26 Sakrebulo Chairpersons willingly resigned, while six were dismissed by Sakrebulo.
Following October 1, 2012, new factions were set up in 55 municipalities of Sakrebulo. In a number of cases replacement resulted in redistribution of power and formation of new majority.
ISFED also studied staff changes in local self-governments following the parliamentary elections and found that out of 69 municipalities staff changes occurred in 55 Gamgeoba's and 26 Sakrebulo's.
According to public information obtained from self-governments, from October 1, 2012 to June 1, 2013, total of 2321 employees were dismissed, including mostly trustees of territorial agencies. Their dismissals were often preceded by meetings with Gamgebeli. Total of 519 trustees were dismissed in 34 municipalities.
“Majority of dismissed [employees] submitted resignation letters willingly. Often dozens of employees wrote resignation letters on the same day, which makes us question voluntary nature of their decisions. In a number of cases dismissed public servants are willing to openly state that their resignation was demanded by their superiors; however, majority refrains from publicly recognizing the fact,” – says Nino Lomjaria.
Protest rallies demanding resignation of municipal officials were staged on a systematic basis by local population in municipalities following October 1, 2012. Regrettably often the protest of citizens turned illegal by expression of physical violence, invading buildings, disrupting meetings and blocking buildings. Similar rallies were held in 40 municipalities. In 27 cases protest rallies turned illegal.
The report also includes 27 cases of legal persecution, in which the investigation was mostly launched on charges of abusing budget resources and official power.
ISFED believes that the present situation suggests the necessity of municipal reform. The reform should ensure as much as possible meaningful independence of self-government and no interference in issues that fall under its purview.
ISFED will continue to monitor municipal processes in frames of the pre-election monitoring and will publish information about alleged pressure or any other types of violation in its pre-election monitoring reports.
Publishing this report was made possible with the financial support from the Embassy of the Kingdom of Netherlands in Georgia. The contents of the report belong solely to ISFED and do not necessarily reflect the views of the Embassy of the Kingdom of Netherlands in Georgia.
<< Back