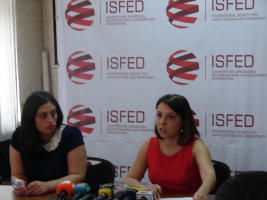 The International Society for Fair Elections and Democracy (ISFED) presents the second pre-election monitoring report for the October 27, 2013, presidential elections. The monitoring covers the period from July 20 through August 4, 2013.
Relatively active pre-election campaign took place during the reporting period. However it was also marked by acts of violence against political opponents during primaries of the United National Movement (UNM). Individual cases of abuse of state resources, as well as agitation by unauthorized individuals (one case) and obstruction with the work of a representative of a monitoring organization (two cases) were also reported.
Registration of presidential candidates and initiative groups with the Central Elections Commission (CEC) is now underway. Registration of holders of dual citizenship has proven to be most problematic.
Key conclusions drawn from the monitoring efforts of ISFED are as follows:
• Acts of violence have been witnessed during the UNM primaries, perpetrated by former political prisoners and groups of radical opponents of the former ruling party. Despite the aggression, the Ministry of Interior Affairs was able to ensure safety for representatives of the UNM participating in the primaries.
• The reporting period was marked by abuse of state resources:
• ISFED reported one case that involved campaigning by unauthorized individuals. Violating the Election Code of Georgia charity organization Women for Peace and Life pursued campaigning in favor of the Georgian Dream coalition. The organization provided wheelchairs to persons with disabilities free of charge, made a public statement from the office of the Georgian Dream in Ozurgeti and expressed gratitude for the support provided by the coalition. This way, it engaged in pre-election campaigning violating the applicable law.
• ISFED believes that the CEC Chairperson wrongfully interpreted the Constitution by refusing to accept applications for registration of individuals holding dual citizenship as candidates. Relevant Constitutional provisions are somehow ambiguous; however, based on their cumulative and complex rather than fragmented interpretation we believe that the Constitution of Georgia does not prohibit holders of dual citizenship from participating and being elected in presidential elections.
• Hindrance of journalistic reporting and the work of observers have also been reported. Member of Kaspi Municipality Sakrebulo and his supporter were exerting intense pressure against a journalist of Shida Kartli Information Center and ISFED’s long-term observer (LTO) Irma Kitriashvili in an effort to obstruct her professional activities. The work of ISFED’s LTO in Kobuleti District was also obstructed.
• In its first pre-election monitoring report ISFED noted that financial support provided by Cartu Foundation to the Rural and Agricultural Development Foundation suggested vote buying. Therefore, ISFED started examining funding and programs of the Rural and Agricultural Development Foundation and requested access to public information; however, the Ministry of Agriculture refused to make information about sources of funding or current projects of the Fund public.
To facilitate fair and equal election environment ISFED calls on:
the authorities – to unequivocally condemn and distance themselves away from all acts of violence hindering political activities;
law enforcement agencies – to put forth maximum effort for avoiding violence and utilize adequate sanctions in response to any violence;
political parties and initiative groups – to ensure distancing of aggressive supporters and activists away from meetings held by other parties and candidates;
to explicitly urge their representatives and activists to refrain from pressuring representatives of independent monitoring organizations and media in any way.
presidential candidates – candidates with declared election goals and the candidate of the ruling political force in particular should refrain from participating in events funded from the Budget;
the CEC and its chairperson – the CEC chairperson, when considering registration of dual citizenship holders, should interpret the law in a way that does not conflict with Articles 29, 70 and 1044 of the Constitution, allowing individuals to realize their equal opportunity to register as candidates;
discuss reconsidering of refusals to register dual citizensas presidential candidates;
charity organizations – refrain from any activities that would associate their work with a subjects with election goals;
state agencies – be as transparent and open as possible when dealing with monitoring organizations.
Please see the full report HERE.
Publishing this report was made possible with the generous support of the American people through the United States Agency for International Development (USAID) and the National Democratic Institute (NDI). The contents of the report belong solely to ISFED and do not necessarily reflect the views of NDI, USAID or the United States Government
<< Back