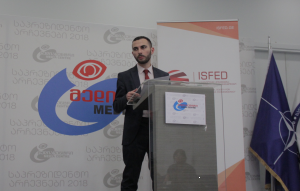 The International Society for Fair Elections and Democracy (ISFED) was monitoring the second round of the 2018 Presidential Elections in all electoral districts around Georgia. ISFED Observation Mission consisted of 651 short-term observers (STO) at polling stations, 73 observers deployed at district electoral commissions and 78 mobile teams. ISFED observers were also present at 12 polling stations abroad. PVT and Incident Centers were operating in the central office staffed with 15 operators and 10 lawyers.
ISFED observation of the second round of Presidential Elections was based on the Parallel Vote Tabulation (PVT) methodology, which enables us to timely detect violations, systematically evaluate the entire Election Day process and verify the accuracy of the official election results.
Key Conclusions
Based on the observation, ISFED can conclude that the tabulation of votes was mostly conducted in compliance with relevant electoral procedures. Similarly to the voting process, number of violations were reported during counting of votes, such as, improper filling of summary protocols and other procedural shortcomings. Incidents of violence were identified in Marneuli and Lagodekhi after closing of polling stations.
ISFED filed 53 complaints with Precinct Electoral Commissions (PECs) and 76 complaints with District Electoral Commissions (DECs).
PVT Findings
According to ISFED PVT data received from observers, voter turnout across the country was 56.2%, (with a margin of error of +/-0.7%), which is significantly higher than the voter turnout during the first round of elections - 46.6%.
Based on the information received about the Election Day process, ISFED is confident in its PVT results. ISFED received information from 99.9% of its observers deployed at random representative sample of polling. Below are the results of the presidential candidates. For each result the margin of error is +/-0.8% and is calculated at 95% confidence interval.
According to ISFED, the percentage of invalid ballots across the country is 3.0% with a margin of error of +/-0.1%. This result is similar to the first round of the Presidential Elections when invalid ballot rate was 3.2%. The percentage of invalid ballots in Tbilisi for the runoff election is 4.5% which represents an increase compared to the first round of Elections (4.1%).
Violations observed by ISFED at the time of the statement
ISFED’s observers reported following violations:
Cases of violence
Restriction of observer rights
Violations related to the summary protocols
Number of ballot papers exceeding the number of signatures
At PEC #2 of the election district #83 (Khelvachauri) and at PEC #11 of the election district #30 (Kaspi), number of ballot papers exceeded the number of signatures by one.
At PEC #37 of the election district #7 (Chughureti), number of ballot papers exceeded the number of signatures by two.
Breach of the rules of casting of lots
Issues related to ballot papers
Violation of sealing procedure of election materials
ISFED Observation Mission is made possible with the generous support from the American people, by financial support from the United States Agency for International Development (USAID) and National Endowment for Democracy (NED). The Mission is also supported by the Federal Foreign Office of Germany, Runoff Election Day observation is carried out with financial support from the Royal Norwegian Embassy, the European Endowment for Democracy (EED) and the Embassy of the United Kingdom of Great Britain and Northern Ireland. The views expressed in this statement belong solely to the International Society for Fair Elections and Democracy and may not necessarily reflect the views of USAID, NED, the United States Government, the Federal Republic of Germany, the Norwegian Embassy, British Embassy, or EED.
<< Back