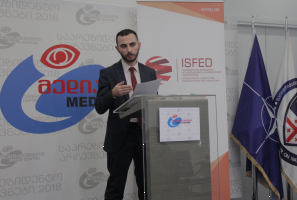 The International Society for Fair Elections and Democracy (ISFED) is monitoring the second round of 2018 Presidential Elections in all electoral districts around Georgia. ISFED Observation Mission consists of 651 short-term observers (STO) at polling stations, 73 observers deployed at district electoral commissions (DECs) and 78 mobile teams. ISFED observers are also present at 12 polling stations abroad. PVT and Incident Centers are operating in the central office staffed with 15 operators and 10 lawyers.
ISFED’s observation of the second round of Presidential Elections is based on the Parallel Vote Tabulation (PVT) methodology, which enables us to timely detect violations, systematically evaluate the entire Election Day process and verify the accuracy of the official election results.
In this statement, ISFED presents its assessment of the voting process and closing of polling stations based on the information provided by 99.7% of PVT observers.
Key Findings
Based on the analysis of the information received through the PVT, ISFED concludes that the voting process at most of the polling stations throughout Georgia was conducted generally in accordance with the procedures prescribed by the law. However, during the voting process, violations of voters’ secrecy of vote remained as the most problematic. Outside of polling stations mobilization of coordinators and supporters of Georgian Dream and of Salome Zourabichvili were at massive scale. They were tracking the voters who came to the precincts, which is the continuation of an infamous malpractice of attempted influence on voters’ will. Cases of violations of secrecy of vote on Election Day and practice of tracking the voters once again highlight the problems related to the environment of intimidation and harassment during the pre-election period and its negative effect on the electoral process.
Near the closing of polling stations, ISFED observed isolated serious incidents, such as: loss of table version of the voters’ list, unauthorized intrusion at precinct with an attempt of kidnapping a mobile ballot box. Other violations observed at this stage were mainly connected to the procedural shortcoming.
At this time, ISFED observers have filed 46 complaints with Precinct Electoral Commissions (PECs) and 54 complaints with District Electoral Commissions (DECs).
Detailed Information from the PVT
Violations
As of now, ISFED observers have reported following violations:
Loss of electoral documentation
Break into the PEC by unidentified individuals
Alleged attempt to influence the voters’ will
Number of ballot papers exceeding the number of signatures
Violations of the secrecy of vote
Violations regarding mobile ballot box
Presence of unauthorized persons at PEC
Signature by another voter
At PEC #100 of the election district #67 (Zugdidi), a voter found another voter’s signature in his field.
Violation of inking procedure
Irregularities related to ID cards
ISFED allows citizens to follow the election process online via Elections Portal – www.electionsportal.ge, where election violations are immediately posted on the incident map. In addition, anyone can report violation of the electoral process by sending a text to a toll-free number 90039.
ISFED will issue next statement on November 29
ISFED Observation Mission is made possible with the generous support from the American people, by financial support from the United States Agency for International Development (USAID) and National Endowment for Democracy (NED). The Mission is also supported by the Federal Foreign Office of Germany, Runoff Election Day observation is carried out with financial support from the Royal Norwegian Embassy, the European Endowment for Democracy (EED) and the Embassy of the United Kingdom of Great Britain and Northern Ireland. The views expressed in this statement belong solely to the International Society for Fair Elections and Democracy and may not necessarily reflect the views of USAID, NED, the United States Government, the Federal Republic of Germany, the Norwegian Embassy, British Embassy, or EED.
<< Back