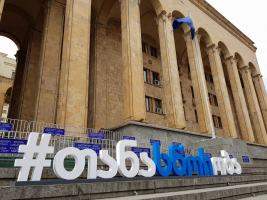 Civil society organizations urge the Parliament of Georgia to support during the plenary session legislative initiative backed by 37,455 signatures to ensure equal political representation of women and men.

On 12 June 2017, a legislative initiative was submitted to the Parliament of Georgia by 37,455 voters, intorducing mandatory requirement for parties and blocs to prepare gender balanced lists for elections where every other candidate is of a different sex, and replace any elected member who abandons his/her mandate with the next successful candidate on the party list who is of the same sex. The proposed model is a temporary special measure to correct gender imbalance. If approved, share of women in the 2020 Parliament will be at least 26%.

Women account for 52.3%of Georgian population while their representation in elected offices is disproportionately low. In the last parliamentary elections women were able to secure only 16% of seats in the legislature and they account for 13.46% of elected members of Sakrebulos. With such figures Georgia is legging far behind developed countries in terms of women’s political representation. Despite the slight increase in the number women in elective office over the recent years, at current pace it will take decades to correct the gender imbalance in legislative and local self-government bodies.

Experience shows that women have to overcome important social and economic obstacles to be nominated as candidates for elective office. Women’s representation is further discouraged by the existing parallel electoral system in Georgia.

Meaningful measures should be taken to overcome the existing barriers. Gender quotas in proportional election lists is a temporary legislative measure to ensure equal participation of women and men in politics. According to the polls, majority of Georgian population believes that number of women in Parliament and in self-governing bodies is very low and support mandatory gender quotas, as evidenced by over 37,000 signatures.

Under the amendments made to the Constitution in 2017, Georgia committed itself to ensuring elimination of inequality between men and women and achieving substantive equality, including by taking special measures. The obligation to ensure gender equality is established by many international agreements, including the Convention on the Elimination of All Forms of Discrimination against Women (CEDAW). In its recommendation prepared after Georgia submitted the fourth periodic report on the women’s rights situation in the country, the CEDAW committee states that Georgia should take meaningful steps to strengthen gender equality, including by taking mandatory measures to improve women’s participation. In addition, the updated EU-Georgia Association Agenda contains new obligations for Georgia, including the obligation to take active steps towards increasing women’s representation in political life and decision-making process.

The draft law provides a historic opportunity for Parliament to help increase women’s political participation. We are pleased that during committee-level discussions the draft law as supported by the legal affairs, human rights protection and regional development committees.

11. Network of Journalists for Gender Equality

28. Society of Democratic Women of Marneuli

31. Network of Centers for Democratic Engagement

33. Association of Education and Labor

38. For Rights and Education

40. Center for Psychosocial and Medical Rehabilitation of Victims of Torture

51. For the Better Future

79. Center for Development of International Business and Promotion of Investments

99. Union of Azerbaijani Women of Georgia

104. Welfare and Development Center of Georgia

109. Institute for Development of Freedom of Information

115. Coalition of Organizations of PWDs and Parents – Movement for Change

116. Down Syndrome Association of Georgia and Social Enterprise Babale