Intimidation, Interference with Campaign, Conflicts of Interest and other Cases in ISFED's Second Interim Report 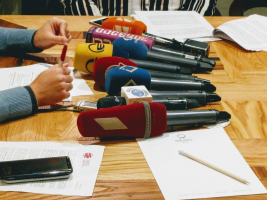 On September 29, the International Society for Fair Elections and Democracy (ISFED) published the second interim report of monitoring the pre-election environment of the 2017 local self-government elections. The report covers the period of September 5-25, 2017.
During the reporting period election campaigning became noticeably active. ISFED observers monitored 252 public meetings held by electoral subjects.
ISFED detected 13 instances of alleged political intimidation/harassment, 2 instances of violence, 4 cases of interference with campaigning, 9 cases of illegal participation in campaigning, 3 instances of misuse of administrative resources, 1 case of vote buying, 4 cases of destruction of campaign materials. 13 cases of conflict of interest in district electoral commissions (DECs) also came under ISFED attention, as well as 2 cases of suspicious donations.
ISFED found a particular trend of conflict of interest in DECs, as family members of some election commissioners are running in the elections as political party candidates. Such cases concerned both professional and party-appointed election commissioners.
As the election campaign became active, instances of harassment/intimidation on alleged political grounds against members and activists of opposition parties became apparent. In some of these cases opposition candidates were threatened by termination from employment. Acts of harassment summarized in the report also contain signs of misuse of administrative resources.
In two separate districts unknown individuals vandalized precinct electoral commission offices. The two incidents are similar and are currently under investigation.
With respect to interference with activities of electoral subjects, of note is the attempt to disrupt a meeting of an independent mayoral candidate Aleksandre Elisashvili with voters. Local self-government official and employees of the Georgian Dream campaign office were involved in the incident.
Misuse of administrative resources mostly entailed use of means of communication at administrative entity’s disposal in favor of the ruling party. ISFED believes that a charity football match to be held on September 29 with participation of Tbilisi mayoral candidate Kakha Kaladze and international football stars poses the risk of misuse of administrative resources, violation of campaign rules and illegal donation. The match is organized by the Georgian Football Federation.
Participation of unauthorized individuals in the election campaign was another noticeable trend. It was mostly local government employees who illegally participated in campaigning. In 4 instances ISFED filed a complaint with the electoral administration, seeking imposition of administrative penalty on responsible persons.
Publishing the report is made possible by the generous support from the American people through the United States Agency for International Development (USAID) and the National Endowment for Democracy (NED). The contents of this publication belong solely to the ISFED and may not necessarily reflect the views of USAID, the United States Government or NED
<< Back