ISFED Monitoring Mission for the Runoffs of the Parliamentary Elections 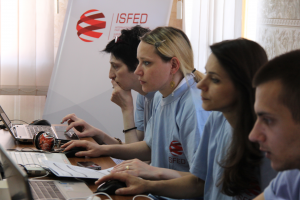 On October 30, 2016, the International Society for Fair Elections and Democracy (ISFED) will monitor the runoffs of the Parliamentary Elections in 50 majoritarian constituencies through a monitoring mission comprising of nearly 700 observers.
ISFED will position over 600 short-term observers in PECs across the country to monitor the polling and the vote counting process by PVT methodology. The monitoring mission of ISFED will also include 30 mobile teams and 43 DEC observers. PVT and incident centers will be operating at the Central Office of ISFED on the Election Day.
450 short-term observers will be stationed throughout a representative sample of polling stations identified by random sampling in all districts where the runoffs will take place. In addition, ISFED observers will be present in all polling stations of the following four majoritarian electoral districts: Marneuli no.36, Akhaltsikhe-Adigeni no.44, Kutaisi no.49 and Zugdidi no.66. These districts were marked by intense competition among contenders or important incidents on or following the Election Day during the first round of the parliamentary elections.
ISFED monitoring mission for the second round of the Parliamentary Elections of Georgia is supported by the United States Agency for International Development (USAID), the Federal Foreign Office of the Federal Republic of Germany, the Embassy of the Kingdom of the Netherlands in Georgia and the European Union.
<< Back