Acts of Physical Confrontation, Intimidation/Harassment and Political Context ahead of the Runoff Elections 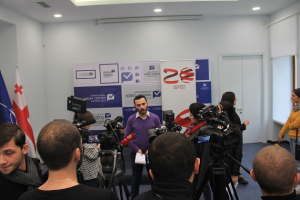 On October 28, International Society for Fair Elections and Democracy (ISFED) published the interim report of pre-election monitoring of the runoffs of October 8, 2016 parliamentary elections. ISFED monitored the pre-election period using 38 long-term observers (LTOs) in all electoral districts where runoffs will be held.
ISFED observed the following incidents during the pre-election period: 2 cases of physical confrontation, 8 cases of intimidation/harassment on alleged political basis; 1 case of dismissal on alleged political basis; 2 cases of abuse of administrative resources and vote buying. During the pre-election period we also found that PEC members were present in the Georgian Dream’s campaign office on 2 separate occasions.
The report mainly summarizes cases of intimidation and harassment on political basis against supporters and activists of different opposition parties, which paints a picture of violence during pre-election campaign. These cases contain signs of criminal offence and warrant timely and effective response by the law enforcement authorities.
Violent incidents that occurred at three polling stations in Zugdidi and Marneuli electoral districts on October 8 created a negative setting for the pre-election period. The state’s differentiated response to these incidents gives rise to suspicions about selective approach to the criminal offences that have been perpetrated.
<< Back