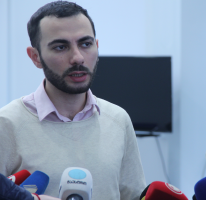 International Society for Fair Elections and Democracy (ISFED) is monitoring the October 22 rerun elections in all four electoral precincts of Zugdidi and Marneuli and in both district electoral commissions (DECs).
ISFED observers have reported that voting is held in a peaceful environment in all electoral precincts and no important violations have been observed.
Certain irregularities have been observed in the electoral precinct no.48 of Marneuli majoritarian electoral district #36, which opened late. Notably, due to the lack of space at the polling station and a high level of interest of political party representatives, media and observers, as well as a high voter turnout, certain problems were observed in the process of regulation of the flow of voters; the mobile ballot box list was drafted in an incomplete manner but the issue was resolved after it was highlighted.
Political party leaders and supporters are present outside the polling stations in Marneuli and Zugdidi but no incidents have been observed. We urge political parties and their supporters to help facilitate a peaceful conduct of polling and counting of votes. We also urge the law enforcement authorities to ensure safe environment for the rerun elections at the precinct and district levels.
<< Back