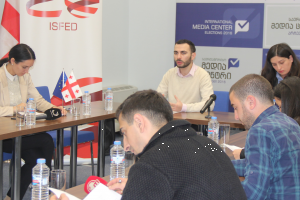 On October 21, 2016, the International Society for Fair Elections and Democracy (ISFED) published the performance report of members of the 8th Parliament of Georgia elected through the majoritarian voting system.
The report covers the period from November 2012 through February 2016 and summarizes results of monitoring the parliamentary performance of majoritarian MPs, including number of their legislative initiatives, as well as quantitative analysis of their absences from plenary sessions without a valid reason and speeches made at the plenary sessions.
“331 bills introduced by majoritarian MPs during the reporting period were initiated by a total of 36 MPs, with the most number of bills initiated by Davit Onoprishvili – 41 bills, followed by Vakhtang Khmaladze with 33 bills and Tamar Kordzaia with 22 bills introduced in the 8th Georgian Parliament” – said Mikheil Benidze, ISFED Executive Director.
Nearly 10% of majoritarian MPs never made a speech during a plenary session; 30% gave a speech no more than 10 times, while 17% used the parliamentary platform at least 100 times or more. During the reporting period, majoritarian MPs missed a total of 378 sessions without a valid reason. Out of 73 majoritarian MPs, only 11 never missed a plenary session.
The report also provides information about actions of majoritarian MPs taken in response to written requests of citizens and frequency of their meetings with constituents. Based on the information provided by the bureaus of 27 majoritarian MPs, the most number of citizen requests were addressed to majoritarian MPs of Poti, Nadzaladevi, Akhmeta, Kutaisi and Vake.
“Issues raised in most of the written requests received by bureaus of majoritarian MPs fall under the purview of local self-governments and the Ministry of Labor, Health and Social Affairs or other state bodies” – said Nino Rizhamadze, ISFED Lawyer.
In 2013-2015, a total of GEL 12 065 777 was spent to support work of the bureaus of majoritarian MPs in the 8th Parliament of Georgia.
<< Back