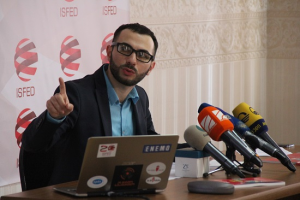 On May 10, International Society for Fair Elections and Democracy (ISFED) presented a report of monitoring salary expenditures made to members and employees of the Central Election Commission in 2011-2015.

ISFED analyzed wages, bonuses and supplementary pays made to the CEC management team, its members and staff based on public information requested from the CEC.

As to the current chair of the Commission, Tamar Zhvania, from September 2013 through November 2015, she received a total salary of 32,520 laris, including 165,123.55 laris in wages, 66,762 laris in bonuses and 97,635 laris as supplementary pays. Total amount of bonuses and supplementary pays received by the CEC Chair from September 2015 through November 2015 amounted to 99.6% of her total wage.

Giorgi Sharabidze was appointed to the office of the CEC Deputy Chair in December 2013. From December 2013 through November 2015, he earned total remuneration of 218,775.36 laris, including 116,060.36 laris in wages, 47,882 laris in bonuses and 54,833 laris in supplementary pays. Total amount of bonuses and supplementary pays received by the Deputy Chair during the period amounted to 88.5% of his wage. The report reveals similar trends in compensation of the CEC secretary and remaining 10 members (non-managerial positions) of the Commission.