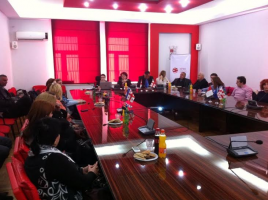 On 5, 6, 7 and 10 November, International Society for Fair Elections and Democracy has conducted roundtable meetings within the campaign “It’s Time for Local Self-Governance” in Bolnisi, Senaki, Kutaisi and Rustavi with the representatives of local self-government bodies, in particular, the meetings were attended by the representatives of Sakrebulo, Gamgeoba and Mayor’s Office.

At the roundtable meeting was discussed the additional mechanisms of citizens participation in local self governance, the main purpose of which is to increase citizens’ involvement in local self government matters. At the meeting were discussed the need to create alternative forms of citizens involvement, competences of public councils, obligations of local government bodies, territorial scope of public councils, status, rules of establishment and structure.

Participants were actively engaged in the discussions and noted, that it is necessary and they welcome citizens’ active involvement in self governing processes.

The meetings were held within the project “Facilitating Creation of Additional Forms of Citizens’ Participation in Local Governance” implemented by the “Open Society – Georgia Foundation” together with partner NGOs.