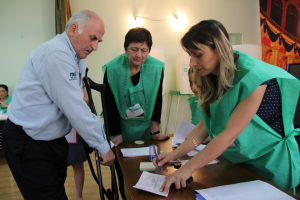 ISFED believes that the second round of local self-government elections set an important precedent in the electoral history of Georgia. The necessity of the second round in these elections proved that a competitive electoral environment is forming in Georgia, which means that no party, including the ruling one, is guaranteed a victory in the first round. We think that the aforementioned set a higher standard for conducting democratic elections in the country.
Based on the analysis of the information received through PVT methodology ISFED concludes that the voting and vote count processes were conducted in a calm environment. However, unfortunately, cases of verbal and physical confrontation between the political party activists were observed in the vicinity of the polling stations. These instances fell outside ISFED’s PVT observation area, since they took place outside the polling stations. Noteworthy was a trend of 140 voters at 73 polling stations of 19 districts  going to the polling stations only to find out that they were not registered in the voters’ lists. Out of these 140 voters, 53 stated that they had cast their vote in the first round of elections on June 15.
Most of the violations reported by the ISFED observers were minor and of a procedural nature and could not have affected the final outcome of elections. All ISFED observers, with one exception, had the opportunity to observe and react upon the Election Day processes without any restrictions.
Given the information collected on the conduct of the Election Day process, ISFED is confident in the projections of Parallel Vote Tabulation (PVT). ISFED has received information from 100% of their observers.