Voting Process and Voter Turnout by 15:00 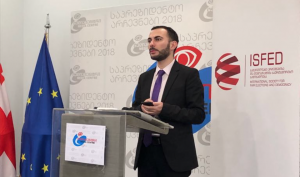 The International Society for Fair Elections and Democracy (ISFED) is monitoring the second round of 2018 Presidential Elections in all electoral districts around Georgia. ISFED Observation Mission consists of 651 short-term observers (STO) at polling stations, 73 observers deployed at district electoral commissions (DECs) and 78 mobile teams. ISFED observers are also present at 12 polling stations abroad. PVT and Incident Centers are operating in the central office staffed with 15 operators and 10 lawyers.
ISFED’s observation of the second round of Presidential Elections is based on the Parallel Vote Tabulation (PVT) methodology, which enables us to timely detect violations, systematically evaluate the entire Election Day process and verify the accuracy of the official election results.
In this statement, ISFED presents information about voter turnout as of 12:00 and any violations that have been reported by this time.
Key Findings
At the moment of this statement, an important trend is the attempts to influence the will of the voters. Similar to the first round of the presidential elections, supporters of Georgian Dream and candidate Salome Zourabichvili, and so called “party coordinators” are mobilized outside of polling stations in various districts. They are tracking the voters who came to the polling stations. ISFED observer also identified a possible case of vote buying near a precinct.
Violations of secrecy of vote still continue and became a trend during voting process. Taking into account the cases of intimidation on the voters during the pre-election period, the violations of secrecy of vote are concerning since it negatively affects the free expression of the will of the voters.
Cases of aggressive attitude towards ISFED observers and interference in their work were identified on and near several precincts. Commission chairpersons and other observers restricted ISFED observers to take photos/videos or denied entry to polling stations. Apart from this, ISFED observer was physically assaulted by the chairman at the PEC#10 of Marneuli district. Such cases are categorically unacceptable. ISFED calls upon the election administration to act on the abovementioned and ensure that all observers conduct their work in a safe and free environment.
At the moment of the statement ISFED has filed 22 complaints at the PECs. 22 complaints are filed at the DECs as well.
Voter Turnout by 12:00 (PVT Results)
According to ISFED PVT data, voter turnout by 12:00 is 19.5%, (with a margin of error of +/-0.3%), which is higher than the first round of presidential elections when voter turnout by 12:00 was 16.0%.
In Tbilisi, by noon, the voter turnout was 18.2%, which is higher compared to the voter turnout at 12:00 during the first round of elections (13.2%). In regions (outside of Tbilisi) voter turnout was 19.9%, whereas for the first round of elections the voter turnout by 12:00 in regions was 15.8%.
PVT analysis allows us to calculate the average time it takes for a polling station to process a voter. According to the information recorded from the PECs, in 69.3% of polling stations, the commission processed, on average, one voter per minute, while in more than 30.7% of polling stations the commission processed 1 to 2 voters per minute.
Violations
As of now, ISFED observers have reported the following violations:
Vote buying
Violations of the secrecy of vote
Alleged attempt to influence the voters’ will
Restricting the rights of observers and physical assault
Improper handling of election documentation
Violations regarding signatures in the voters list
Violations regarding mobile ballot box voting
Placing ballot papers in the mobile ballot box without envelopes
ISFED allows citizens to follow the election process online via Elections Portal – www.electionsportal.ge, where election violations are immediately posted on the incident map. In addition, anyone can report violation of the electoral process by sending a text to a toll-free number 90039.
ISFED calls upon all eligible voters in Georgia to go to the polls and express their free will by voting in favor of a candidate of their choice.
ISFED reminds voters to have one of the following documents with them to be able to participate in the elections:
ISFED will release its next statement at 15:30
ISFED Observation Mission is made possible with the generous support from the American people, by financial support from the United States Agency for International Development (USAID) and National Endowment for Democracy (NED). The Mission is also supported by the Federal Foreign Office of Germany, Runoff Election Day observation is carried out with financial support from the Royal Norwegian Embassy, the European Endowment for Democracy (EED) and the Embassy of the United Kingdom of Great Britain and Northern Ireland. The views expressed in this statement belong solely to the International Society for Fair Elections and Democracy and may not necessarily reflect the views of USAID, NED, the United States Government, the Federal Republic of Germany, the Norwegian Embassy, British Embassy, or EED.
<< Back